Home » Notification » DIVE THE 'AMAZON OF THE SEAS' IN TIMOR-LESTE

DIVE THE 'AMAZON OF THE SEAS' IN TIMOR-LESTE

Timor-Leste sits within the Indo-Pacific “coral triangle”, home to more species of marine life than anywhere else on earth – the “Amazon of the Seas”.  The region is home to more than 3,000 species of fish and nearly 500 reef-building corals – an amazing 75 percent of all known coral species – while its shores provide nesting grounds for six of the world’s seven species of sea turtles. Timor-Leste’s clean, warm waters provide ideal conditions for a healthy coral reef ecosystem, supporting a vast diversity of creatures, from the smallest shrimp to the dugong or sea cow, a species that is at risk of extinction.  Timor-Leste’s north coast is close to the edge of an underwater precipice, the Wetar Strait, a marine trench almost three kilometers deep, which provides a corridor for pelagic and migrating animals: whales, dolphin, tuna and sailfish patrol offshore. The fringing coral reef is constantly refreshed by the deep water, which brings both predators and prey within reach of its inhabitants. This is the recipe for some of the world’s best diving.

To dive in Timor-Lest can be as simple as a stroll into the sea from the roadside. It can be as exhilarating as a flying drift dive, looking out into the deep blue waters, shoulder to shoulder with a vast school of barracuda.

The country’s dramatic mountain scenery is often echoed underwater: plunging walls slope off into coral gardens, dense with  sponges and fans, grazed by flashing shoals of brilliantly colored fish. The variety of corals and marine life makes for an exhilarating experience, whether you are a marine biology enthusiast in search of nature’s stranger, smaller creatures, or a diver who just loves to look at the big picture of life on one of the healthiest coral reef systems in the world.

Most of the best reefs can be reached by divers and snorkellers with just a quick surface swim from the beach and there are many dive sites to choose from within an hour’s drive from Dili - around Metinaro to the east and Maubara to the west. There are also some world-class dives within the Dili city limits -  Tasitolu and the Pertamina Jetty are renowned for the rare creatures to be found there:  nudibranchs, scorpion fish, pipefish -   a host of  rare creatures to delight the underwater photographer.   Atauro Island boasts some of the best coral walls in the region and huge schools of dolphins are often spotted during the crossing. Further afield, the reefs at the eastern extremity of the island within the Nino Konis Santana National Park (Com,Tutuala and Jako Island) teem with life, in a setting of  immaculate white-sand beaches and tropical lowland and monsoon rainforest. 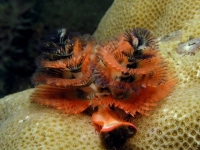